For baseball players, having a strong arm capable of throwing hard is a key component of successful performance, not only from a pitching standpoint but also for position players.

For a pitcher, being able to light the radar gun up has obvious appeal as a higher average velocity gives the hitter less time to react and if placed properly can make the pitch very difficult to hit.

For position players, such as 3rd base or outfield where time is of the essence, being able to unleash a hard and accurate throw to beat even the speediest runners is a skill commonly sought out by coaches of all levels.

However, harder throwing velocity comes with its risks, as the harder the throw the more stress placed on the soft tissues of the elbow and in the shoulder which is responsible for deceleration of the arm. There are several methods of increasing throwing velocity, ranging from general to sport-specific that have been reported on in the strength and conditioning literature, both of which will be broken down and clarified here.

Nonspecific strength work allows the athlete to structure their training to enhance their global strength and power characteristics that make their performance consistent and repeatable. Furthermore, this allows the entire kinetic chain to be loaded from top to bottom, to help enhance the addition of specific strength training.

Researchers have investigated the usage of nonspecific strength training on throwing velocity in athletes from the high school to professional levels and found that using heavier bench press protocols (3-12 rep maximum) resulted in throwing velocity gains of 1.2-4.1%. However, caution must be used in interpreting the results here as the smaller sample sizes makes generalization across the board shaky.

Youth and high-school baseball players have shown improvements in throwing velocity after training with lighter loads, while college and professional baseball athletes have seen increases after heavy and light training.

A standard baseball weighs a total of 5 ounces. Specific strength training involves using an underweight (4 ounces) or an overweight (6+ ounces) ball, during throwing sessions to emphasize throwing mechanics and reinforce a positive adaptation.

Research on increases in throwing velocity using an underweight, overweight or a combination of the two has shown velocity increases from 3.1-7.3%. For each overweight and underweight ball, there are 2 classifications: high specificity and low specificity, based on the weight of the ball in proximity to the standard 5-ounce baseball.


When combining overweight and underweight weighted balls, high and low specificity have been shown to increase throwing velocity; however, more research is needed on overweight, low-specificity weighted ball training.

Caution must be used when prescribing a throwing regimen using overweight low-specificity baseballs, as improper usage could potentially lead to issues with the throwing arm. Factors such as training history, shoulder and elbow strength should be considered before allowing the athlete to participate in any loaded throwing program. High specificity overweight baseballs should be a safe option to introduce starting at the high school level, whereas underweight baseballs can safely be introduced at the youth level.

Check out this infographic created using ATH research by our friends at YLM Sports Science! 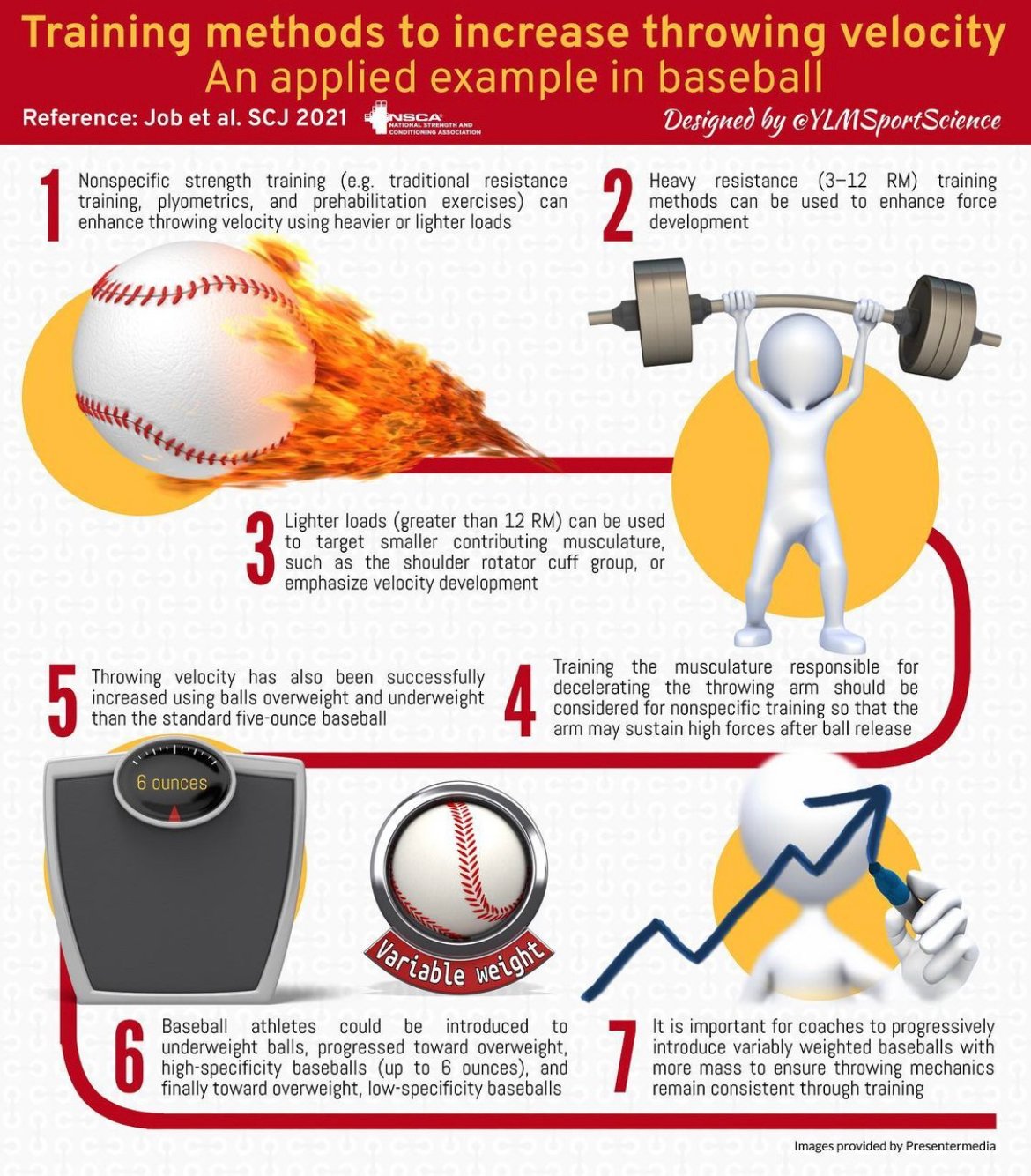 About Athlete Training and Health

We provide adult fitness and sports performance training that benefits all sports and athletes of all levels. Starting with ages 8-18 in our Student ATHlete program and moving into our 18+ Collegiate, Pro and Olympic athlete training in our Next Level ATHlete program – we have training that can meet you where you are and take you to where you want to go. In our collegiate training and professional training, programs can be tailored to your sport and position. Join the ranks of athletes ATH has helped send to championships, the Super Bowl and the Olympics.

Fill out the short form linked below and we'll be in touch about how we can help you reach your athletic training goals.