Creatine: What Is It And What Are The Potential Benefits?

What will be discussed?

This blog will highlight:

When you think of creatine, you probably think of a dietary supplement that people use to increase their lean muscle mass and improve their exercise capacity, and you are right. Creatine has gained popularity since the early 1990’s and is widely used by athletes as an ergogenic aid.1 Furthermore, it is widely supported as an evidence-based performance enhancing dietary supplement.

The body naturally produces 1-2g of creatine per day and distributes 95% to the muscles. The kidneys and liver are responsible for this process through converting the amino acids glycine, arginine, and methionine to creatine.2 Creatine is also ingested through animal based dietary sources such as meat and fish. Dietary sources of creatine within an omnivorous diet account for an additional 1-2g of creatine per day and together with endogenous production contribute 50% to the daily demand. The body storage pool contains between 120-140g of creatine and at least 2g is lost through daily turnover, mostly through urine excretion.2

Supplementation provides a cheap and efficient way to increase the amount of creatine within skeletal muscle. While creatine can be found in meat, amounts are low relative to the typical dose found within most creatine supplements. To meet the recommended dose, athletes would need to consume substantial portions of meat on a daily basis, for this reason, it is typically easiest to meet the recommended dose with a dietary supplement.

The most studied and effective supplemental form is Creatine Monohydrate (CrM). Improvements in exercise performance can be separated by length of use; Short-term CrM supplementation has been linked to improvements in maximal power, work performance and sprint performance. In addition to the short-term benefits, long-term usage is shown to enhance overall training quality, ultimately leading to improved overall performance.1

The protocol for CrM includes a loading and maintenance phase. The loading phase builds up the storage pool while the maintenance phase ensures the pool is saturated. The current recommendations, from the International Olympic Committee (IOC), state a loading phase of ~20g/day (divided into four equal doses) for 5-7 days. For maintenance, it is recommended to consume 3-5g per day, in a single dose, to sustain an elevation in the body pool.3 Following this protocol, one should expect a 10-40% increase in muscle CrM stores. However, this percentage is variable and is dependent upon on the initial muscle storage. For example, one with little CrM muscle storage before supplementation, such as those who consume little meat/fish, might have a 20-40% increase compared to someone who has a larger initial storage who only increases the pool by 10-20%.1 The resulting increase in body pool is accompanied by a combination of increase in lean muscle mass/fat free mass and water retention. Therefore, one should expect an increase in weight during creatine usage.1

The mechanism of enhanced performance is well researched and indicates four main benefits. First, biochemically, phosphocreatine (PCr), a non-nitrogen compound stored in skeletal muscles, is able to rephosphorylate adenosine diphosphate (ADP) to adenosine triphosphate (ATP) during exercise, thus allowing for the increase in exercise tolerance and intensity.1  Pharmacodynamically, this allows the muscles to maintain an elevated power output during high-intensity exercise.4

Second, it increases the phosphate diffusion between mitochondria and myosin heads, enhancing cross bridge cycling and tension maintenance. Next, it can improve cellular homeostasis by buffering pH changes brought on by acidosis through utilizing hydrogen ions from the rephosphorylation reaction of ADP to ATP.

Lastly, it is able to rapidly increase ATP by stimulating the rate-limiting enzyme for glycolysis, phosphofructokinase, and promote glycolysis.5 With long term supplementation, PCr availability and ATP production is increased, allowing the athlete to increase performance with high intensity exercise—specifically intense, repeated bouts of exercise <30 seconds in length.6

Current research has looked at the effects of using creatine supplementation in addition to carbohydrates and protein, two macronutrients which are known to aid in recovery and muscle protein synthesis. A study in 2007 looked at the effects of different supplements (PRO, PRO-CHO, CrM-PRO-CHO) on strength training in recreational male bodybuilders over a 10-week period. Results indicated that supplementation with CrM-PRO-CHO significantly increased lean body mass and strength gains in 1RM hypertrophy exercises compared to PRO and PRO-CHO supplementation.7 Therefore, supplementing creatine on top of PRO-CHO may provide additional benefits.

Creatine supplementation can be beneficial for a wide variety of athletes. Between 15-40% of military personnel and athletes use creatine supplements, and it is the most commonly used supplement taken by NCAA male athletes.8 The proposed benefits, increased PCr, reduced muscle acidosis, and increased body mass/muscle mass can vary between sports. As an example, for those participating in sprint sports (track 60-200m, swim 50m, pursuit cycling) supplementation can help by increasing PCr. Water sports, distance track events (400,800m), and combative sports can benefit from reduced muscle acidosis. Moreover, football players, bodybuilders, and powerlifters can benefit by increasing body mass/muscle mass through supplementation.8 Of course, there is likely to be some crossover in which the sport-specific benefits described may also apply to each of the other sports described. Beyond improving sports performance, supplementation is also beneficial for enhancing recovery and injury prevention. Some research has indicated its ability to decrease inflammatory markers in response to anaerobic sprint exercise and also decrease muscle soreness.9

There are a few common concerns when discussing whether or not to supplement with creatine include causing renal distress, weight gain, and unknown long-term effects1. Altered renal function is the main concern with creatine supplementation due to the increase in serum creatinine levels. The current research indicates there are no detrimental effects on renal function short-term (5 days) or long-term (5 years) with creatine supplementation.1 Another common concern is weight gain. There is a potential 1-2kg increase in body weight when supplementing with creatine, however there are no additional adverse effects.3 This is an important factor to consider, especially for athletes where weight is a concern, and should be understood by the athlete before supplementing.

Some concerns, like renal distress, have not been proven by scientific research, and therefore are outweighed by the benefits of increasing lean body mass, exercise capacity, injury prevention, and management of select medical conditions.1 Considering the majority of current research focuses on male athletes, an area of future research should be conducted with female athletes to determine if there are any gender-related differences and how it could affect the female triad.

In 2007 the International Society of Sports Nutrition stated, ‘the use of creatine as a nutritional supplement within established guidelines is safe, effective, and ethical’, therefore deeming it appropriate for use in athletic performance.1 Creatine monohydrate is the safest and most researched creatine supplement on the market. Based on the literature, if an athlete wants to improve their exercise capacity and lean body mass they should opt for creatine monohydrate, as it is the cheapest and most effective supplemental form of creatine. 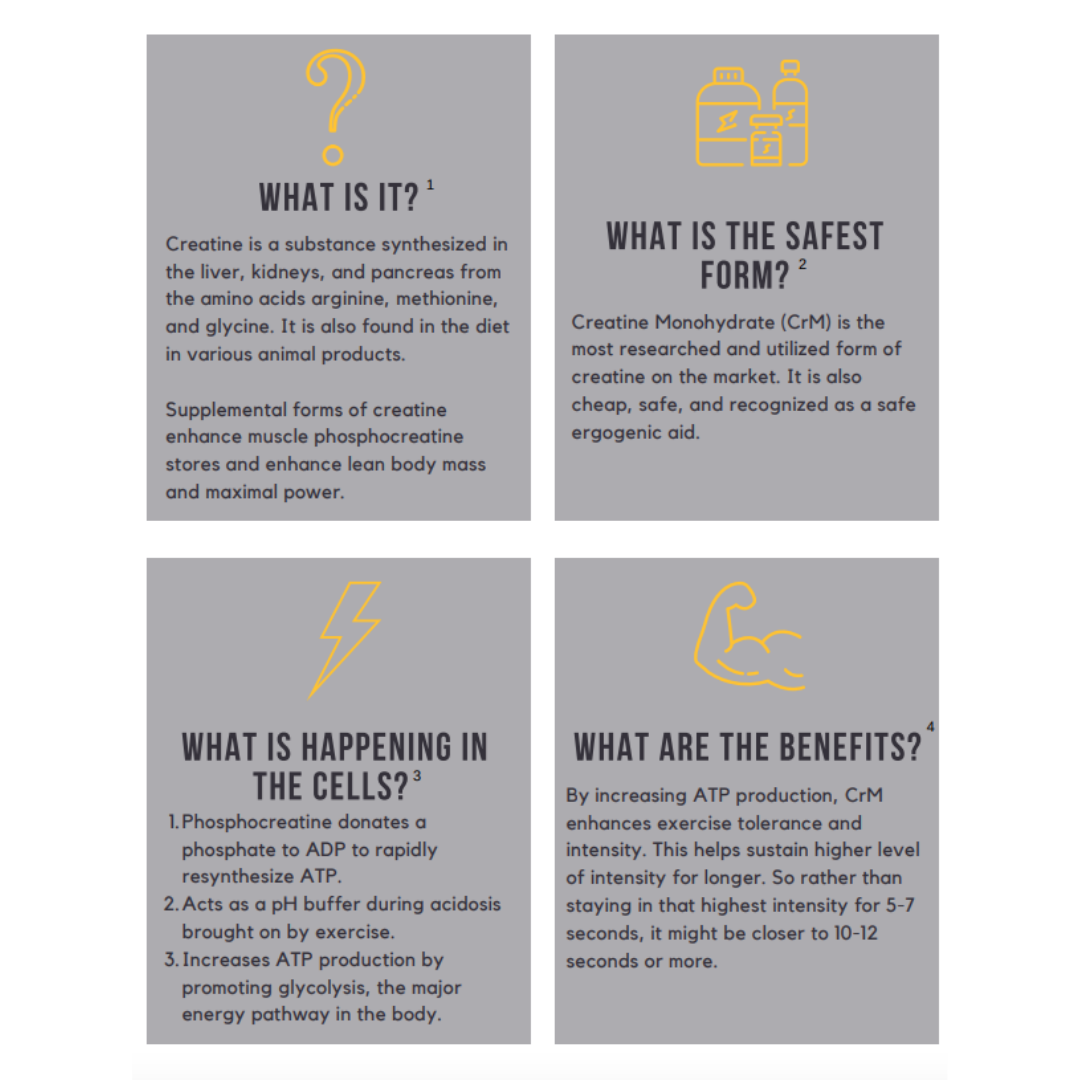 Have questions? Please feel free to talk to an Athlete Training + Health Performance Coach or Brett Singer, Sports Dietitian MS, RD, CSSD, LD with the IRONMAN Sports Medicine Institute.  Brett can be reached at brett.singer@memorialhermann.org or can be found on Twitter at @bsinger10.